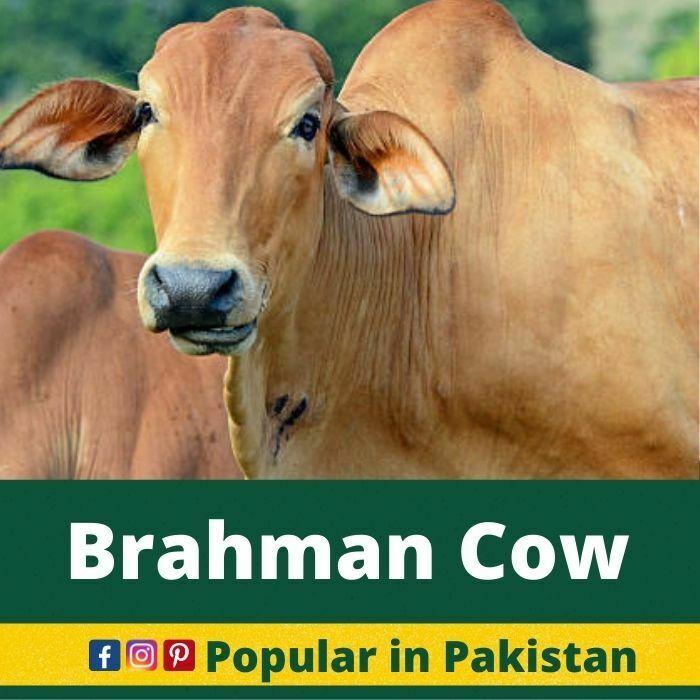 The Brahman cow is an American breed of zebu beef cattle and also known as Brahman or Brahma. The purpose of this guide is to introduce you to the Brahman cattle, its home track, its characteristics, its origin, and all its notable features.

In 1885, the United States introduced the Brahman breed from India. It is primarily raised for meat production. Therefore, these breeds were imported from the United Kingdom, India, and Brazil at various times; including Gir, Guzerá, Indu-Brazil, and Ongole stock.

American Brahmans are found all over the world in tropical and subtropical regions, making them internationally renowned breeds. As the world’s most popular breed of cattle, the American Brahman can be traced back to the mid-1800s when cattle breeders wanted to improve upon European cattle breeds and adjust them to the harsher climate of the US. Since its settlement in the United States, the American Brahman has proven to be useful, and productive and can withstand pests’ diseases, and extreme temperature changes.

Between 1854 and 1946, Gulf Coast breeders also started attempting to create a breed that would thrive in situations where conventional breeds were unable to do so. In the United States, the goose’ rat gear Nellore and Krishna valley cattle breeds were imported from India and Brazil based on their ability to tolerate hot weather, to be disease resistant, and to have unique physical characteristics.

Brazil, Argentina, Brazil, Paraguay, the United States, Colombia, Australia, and many other countries use this breed of cattle for meat processing. As with other zebu cattle, Brahman cattle are primarily raised for meat production, specifically in hot and tropical environments.

Now we will focus on its distinct characteristics. Brahmans have a large hump over the top of their shoulders and along their necks. They can range from grey, and red to almost black in color.

Grazing in the midday sun won’t harm its short, thick, glossy hair and hairy skin from its black pigment, so they are able to tolerate it without suffering. A pendulous ear and upward-curving horns distinguish this species.

Brahman is thought to be able to withstand hot weather owing to their plentiful loose skin, which increases their surface area exposed to cooling.

They thicken and contract their loose skin to act as insulation when it’s cold. Their thick, dense undercoat is protected by long, coarse hair, which can serve as protection. Furthermore, the breed’s hair and skin protect it from insects and certain diseases.

Additionally, Bos indicus cattle have an increased number of sweat glands. The sebaceous glands of these animals secrete an oily secretion that has a particular odor and is said to keep insects away from these animals.

Due to the dark pigment of their skin, they have increased sun-filtering capacity, therefore reducing the risk of cancer and pinkeye. Generally, Sun-related diseases are virtually unheard of among Brahmans.   We can describe Brahmans as intelligent, curious, and shy.

There are the highest numbers of cattle in this breed. The strains derived from this have created numerous taurine-Indian hybrids that have gone on to establish themselves as separate breeds, including the Brangus and Brahman. The tropics of Australia have been the principal destination for its exports.

The color of Brahmans varies from very light grey to almost black. Grey is the dominant color of the breed. It is typical for mature bulls to have darker necks, shoulders, lower thighs, and udders than cows.

The calving of a brahmin cow does not require extensive time or attention, and the cow can produce abundant milk even when temperatures rise over 24 degrees Celsius. Despite their impaired ability to gain feed and produce milk, European and British breeds of cattle are showing reductions in appetite and milk production. Brahmin cattle continue to utilize warm-season forages efficiently in order to produce milk for their calves and themselves.

American Brahmans are able to produce milk commercially due to their milk production capabilities and environmental adaptability. They are ideal for use in the tropics and subtropics where traditional dairy breeds are used for beef production. In addition to producing a high quantity of milk, high butterfat, and protein content, they are also a good source of milk and meat. Therefore you can use them as a multi-purpose breed.

Brahma is considered the most valuable animal for its hardiness, and thriftiness. The Brahmin cattle are known for their heat tolerance and their ability to adapt to adverse environments; particularly for their insect resistance and thrive in extreme heat due to their skin, hair, and coat.

Among the beef breeds, Brahmans are medium-sized animals. On average, they weigh around 1000-1400 pounds, and the bulls weigh around 1600-2200 pounds. At birth, calves weigh 60-65 pounds. The breed grows very quickly, though they wean at comparable weights.

Even in extreme cases of temperature variation, the Brahman cow will produce calves on a year-round basis. There is evidence that she is able to conceive, carry a pregnancy, and give birth to a calf in extreme climates. The longevity of the herd is unparalleled due to its long lifespan and fertility.

Not only are their calves consistently born in extreme environments year after year, but they also exhibit a strong maternal instinct. Also notable is their ability to effectively raise calves. In addition to being small at birth, the growth and weight gain are remarkable.

A cow’s gestational length varies between breeds and cows with longer gestation periods are at a disadvantage when carving intervals of 365 days or less are expected of them. A study reported that it takes an average cow 282 days to give birth. Compared to other breeds; Boss indicus breeds, like Brahman and Brahman base, have longer gestation lengths of 292.8 days.

In contrast to other Bos indicus breeds, the African zebu’s gestation period is similar to that of European breeds. In average conditions, brahman-based breeds have intermediate gestation lengths.

Brahmans are Inquisitive, intelligent, and shy. Although these characteristics suggest careful kind handling, they are thrifty, hearty, and adaptable to a wide range of feed and climate. It is common for Brahmans to become docile and like affection.

The more well-bred, well-chosen and appropriately handled, the better they respond to handling. There are no differences in the handling of Brahmans compared to other breeds. The breeds are also excellent mothers and produce very good milk flows despite adverse conditions that the European breeds cannot cope with.

They are considered highly adaptive, with a reputation for being sensitive and intuitive. A brahman’s mother will not want you to get between her calf and her mother, they have an aggressive side like a mama bear protecting her cubs.

This breed was officially adopted in the mid-1920s when The American Brahman Breeders Association was established. JW Sartre-Well from Houston, Texas, was the association’s first secretary and originally proposed naming the breed Brahman; a registrar and a standard were soon established. To allow for continual improvement of the cattle’s environmental adaptability, the BVA was established in order to create consistency within the North American beef breed.

This is the breed that offers genetic value and is a significant contributor to global beef production. BBA’s main goal is to protect American Brahmans’ economic value in global agriculture by ensuring their unique production traits. An international organization that has produced, exhibited, and exported premium genetics for over eighty-eight years, American Brahman Breeders Association registration certificates are approved by them.

Over 70 countries are represented by the American Brahman breeders association. The association headquartered in Houston Texas oversees the registration and transfer of cattle as well as the gathering of performance data publishing a summary coordinating Professional Studies for breed improvement and the promotion of the breed.

American Brahmans are truly a global breed, influencing more than 70 countries, and making up the world’s largest breed exported from the US. These experiences are largely due to the continued efforts of the association to promote the breed internationally and the help the association provides to buyers of these cattle.

U.S. certifications for animal health are among the strictest in the world. They provide a safe, efficient and reliable transportation system and the proven experience to ensure that both ends remain happy.

American Brahmans have tremendous economic and reputational value on a global scale, as well as prominence in global markets. With their highly specialized features and accurate certification documentation, no breed combines more production and convenience traits that align so well with the unique traits.

Taking into account the world’s rapidly increasing population, the Brahmin breed offers a reliable source of cattle that will help meet the world’s beef and milk needs. Normally registered cattle are available between $4500 and $20000, or even more in rare cases.

The Food and Agricultural Organization (United Nations) states that by the year 2050, British and European cattle will be unable to reproduce and thrive in the tropics and subtropics. A massive increase in population will require 70% more food production. This challenge can be met by American Brahmans, who are well-suited for producing milk and beef.

Their hard dress and adaptability have earned them a considerable reputation. In countries like Australia, the USA, Brazil, Paraguay, Colombia, Argentina, and among many others countries, it is commonly used for meat production.