Pakistan’s National cuisines are derived from its ethnic and cultural diversity. For example, Nihari is known as a National dish of Pakistan.

Usually, the stew juices are soaked up with naan, kulcha, or roti. Then,it may top up with garnishing that includes ginger, garam masala, lemon, caramelized onions, or mint to enliven the flavor.

Table of Contents hide
1 Why is It Chosen as a National Dish?
2 Origin from Pre-segment India
3 Traditional Muslim Dish
4 Breakfast Dish
5 Nihari in Pakistani Regions
6 Pakistan has four ethnic zones.
7 Health benefits of Nihari
8 Types of Nihari
9 The technique to cook Nihari
9.1 Ingredients

Why is It Chosen as a National Dish?

Being a National dish, the recipe must be popular among the home dishes rather than in restaurants. To become a public dish of Pakistan, Nihari should be a family dish across Pakistan.  Nihari is treated as a luminary, daily diet, and street food as well.

The origin begins from the Mughal Era. Nihari slow-cooked meat, usually shank meat of beef or mutton, along with bone marrow. It is the bone marrow that gives it a unique flavor.

Nihari is the thick curry first taken in breakfast by the rich Muslim Nawabs of pre-segment India. The word Nihari is derived from the Arabic word Nahar which means morning, so in this way, the name Nihari is mentioned towards the beginning of the day

Nihari is typically a traditional dish taken from the Mughals’ royal kitchen. Nihari is considered a favorite dish across the borders. Nihari originated in the Awadhi kitchen of Lucknow and is considered as a slow-cooked mutton stew.

Traditionally people describe the Pakistani dish nihari as a public dish of the country. This food of Pakistan is rich, has various spices cooked in great ghee, and is tasty in a true sense.

Nihari is unbelievably becoming a game-changer in Pakistani cuisine. Nihari is recognized as the best breakfast in the world.

Pakistan has a large variety of cuisines as it has a rich culture. As there are cultural differences, the food pattern also differs from location to location. These regions have their specific dietary preferences and ethnic dishes. When you go to Punjab, it feels no one moves an inch away from Nihari. When you are in Sindh, you can’t move away from Biryani or other Pulao.

Dishes are more famous in Punjab and Sindh and in the more significant urban areas for the individuals who can manage its cost. However, in Khyber-Pakhtunkhwa (KP) and Balochistan, nihari and Biryani are not considered as favorite dishes.

Mutton Nihari has a profound flavour. Nihari has an inference from the investigation of Hikmat (Eastern natural medication) about Nihari which states that Nihari is preventive against sinus, the regular cold, and the beginning of fever in the winters of Delhi and Lucknow.During winter season nihari helps to warm the body temperature. It has significant value because it has “energy-boosting properties” in the spices.

Nihari is a slow-cooked dish that is cooked in the bone lamb or mutton marrow stew with spices. It is usually cooked for six to eight hours and is fit to be served at dawn. It is mainly cooked with veal or hamburger shank; however, now lamb and chicken Nihari are also in the mainstream. Magas Nihari is another variety in which an additional kick of magaz (cerebrum) and nali (marrow) is used.

Nihari is one of the most wanted stews in the whole country. Nihari is a dish full of flavoured bone marrow spiced with it, creating one of the best stews that have unbelievable taste in meat dishes of the world.

The technique to cook Nihari

The vital technique is to cook nihari at the same temperature. In this way, the cover of the day, a big wide pot, should be fixed closed with lai (flour stick) to keep up the temperature and steam for moderate cooking.

The meat will simmer and afterward left to stew in the fragrant and amazingly fiery essence of spices. Then, tenderly, the meat is splashed with the vibrant herbs that work to implant the generosity of the heart. 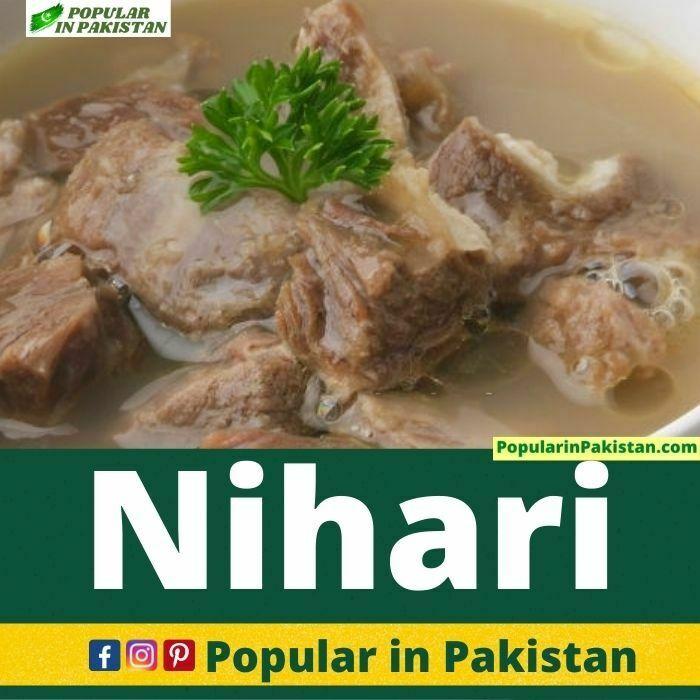 The evolution of Nehari depends upon the cultural variations in different regions.

Traditionally, the cooking time of Nihari recipes is 6–8 hours. Nihari is a breakfast dish as it is eaten in the early morning. The stew of the Nihari is rich in taste; it can be taken till mid-day.

The most popular dishes of Pakistan are typically the regional foods considered as most famous and loved by the people of that specific region.

In the sub-continent for many years, people with different cultures and faith lived together. By mixing their regional spices and cooking techniques, they came up with some excellent cuisine during those times, typically seen across South Asia.

In the different regions of Pakistan, some recipes are about 300 years old.

Traditionally, Pakistani food provides vast diversity, whether a five-course meal or a brunch on a lazy Sunday. Nihari is known as a collection of dry spices that are fried in oil and animal fat. Beef shank is the main ingredient of meat cooked in a Desi Ghee, which is healthy for us. The stew of nihari is a process of slow-cooking that is stirred altogether in a pot to make it unbelievably tasty.

Nihari has a very thick and dripping consistency, in which chunks of tender meat floats in desi ghee. The curry has a deep red color from the spice that is dipped in ghee.

Nihari can be garnished with sliced ginger, spicy green chilies, and sliced lemon that is used to squeeze in the curry of nihari.